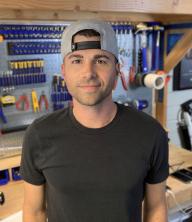 Mark Rober is a Los-Angeles born YouTube star and inventor. He is known for his viral YouTube videos on a variety of topics including videos on DIYs and popular science. He also shares creative ideas with his followers on the web.

His YouTube platform, which is self-named, has an enormous following of more than 16.8 million users. His content on the platform has generated over 1.9 billion views.

A few of his videos that have circulated widely on the internet include “SKIN A WATERMELON party trick”, which was shared in 2015 and has over 112 million views. Another successful video on his platform is his 2019 clip titled “World's Largest Jello Pool- Can you swim in Jello?”. It has over 81 million views.

He has collaborated with fellow YouTube icon, MrBeast. In 2019 they started the #teamtrees initiative, which is a fundraiser aimed at raising funds for the planting of trees.

Several YouTube stars have supported his #teamtrees project. Some of them include PewDiePie, iJustine, and Hannah Stocking.

He has been married to Lisa Rober and as of 2020 the couple have a son together.

Prior to his fame on the internet, Rober worked with NASA for almost a decade and was part of the team that worked on the popular Mars exploration rover known as Curiosity Rover. He even created a video on his contribution to the works on the Curiosity Rover.

He also worked for the multinational tech company called Apple. During his time there he was part of the company’s Special Projects Group and was involved in designing products.

He is also the creator of Digital Dudz, which he eventually sold after running it for two years.

Mark's birthday is in 42 days

Mark Rober is a famous American internet icon, who was born on March 11, 1980. As a person born on this date, Mark Rober is listed in our database as the 4th most popular celebrity for the day (March 11) and the 30th most popular for the year (1980).

People born on March 11 fall under the Zodiac sign of Pisces, the Fish. Mark Rober is the 148th most popular Pisces.

Aside from information specific to Mark Rober's birthday, Mark Rober is the 1244th most famous American and ranks 67th in famous people born in Los Angeles, California, U.S.

In general, Mark Rober ranks as the 1825th most popular famous person, and the 106th most popular internet personality / social media star of all time. “The Famous Birthdays” catalogs over 40,000 famous people, everyone, from actors to actresses to singers to tiktok stars, from serial killers to chefs to scientists to youtubers and more. If you're curious to see who was born on your birthday, you can use our database to find out who, what, where, when and why. You can search by birthday, birthplace, claim to fame or any other information by typing in the search box, or simply browse our site by selecting the month, the day, the horoscope, or any other clickable option.