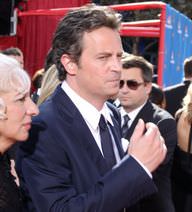 Matthew Perry is a Canadian-American actor. He is best known for his role as Chandler Bing in the TV series "Friends".

He has been nominated for 4 Primetime Emmy Awards and a Golden Globe.

He has dated actress Lizzy Caplan in the past. He has entered rehab many times for Vicodin and other opioids addictions, while, in 2000, he lost 20 pounds because of pancreatitis. He is friends with his fellow cast "Friends" members.

Matthew's birthday is in 203 days

Where is Matthew from?

He was born in Williamstown, Massachusetts, U.S..