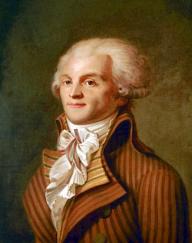 Maximilien Robespierre is remembered best for his contributions to and influence on the French Revolution. The French lawyer and statesman initially gained attention for his positions held in the Jacobin Club and the National Constituent Assembly, through which he advocated for the abolition of slavery and clergy celibacy and for universal manhood suffrage.

He later gained notoriety during the period (1793-1794) he served as a member of the Committee of Public Safety, in which he signed the arrests of over 542 people, with many of them later being executed under the Law of 22 Prairial.

He was the eldest of the four offspring of Maximilien Bathelemy de Robespierre, a lawyer and his wife, Jacqueline Marguerite. His sister Charlotte became a famous writer due to the memoirs she kept of him and their other brother, Augustin.

He was executed on July 28, 1794 following his arrest at the Paris town hall.

Maximilien Robespierre's birthday is on May 6, 1758.

Maximilien's birthday is in 221 days

How old was Maximilien when he died?

Maximilien Robespierre would be 264 years old if he was alive today.