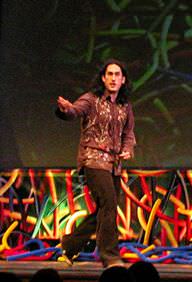 Following a diagnosis for dyslexia, English comedian and actor Ross Noble vowed to pursue a career for which he did not need academic skills to thrive in. He experimented with a variety of fields, including street juggling, stilt walking and clown trouping before discovering his affinity for stand-up comedy in his teens.

Through his appearances in the British television panel show, “Have I Got News for You”, he garnered mainstream attention. As a stand-up comedian, he has toured the UK and Australia and has done performances at the Edinburgh Fringe, Latitude Festival and Melbourne International Comedy Festival.

He grew up in Cramlington, Northumberland. He has been married to an Australian woman named Fran with whom he has two daughters.

He has received a Time Out Award and a WhatsOnStage Award. He also earned a Laurence Olivier Award nomination for his role in the West End production of the musical “Young Frankenstein”.

Where is Ross from?

He was born in Newcastle upon Tyne, England, UK.