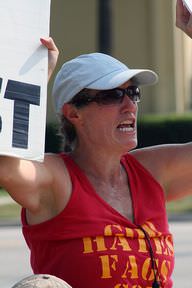 Shirley Phelps-Roper is a celebrated American political activist and a lawyer mostly known for her homophobic protests. She also served as the chief spokesperson for the Westboro Baptist Church of Topeka. She has spent most of her career as a lawyer with her family firm called Phelps-Chartered Co., which was established in 1964.

She was born to Margie Marie and Fred Phelps, who was a pastor and a civil rights lawyer. She has 12 siblings. As of July 2020, she is the wife of Brent D. Roper. The couple have 11 kids including Grace, Zacharias, Joshua, and Megan Phelps-Roper.

Shirley was arrested in 2007 after she was accused of being involved in child delinquency.

Shirley's birthday is in 26 days

Where is Shirley from?

She was born in Topeka, Kansas, U.S..