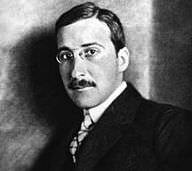 Austrian novelist Stefan Zweig was regarded as one of the most popular authors in the world during the 1920s and 1930s. His works during that period were widely accepted in Europe, America, and South America.

According to historical accounts, Zweig published his first book in 1900 which was entitled “Forgotten Dreams”. He went on to release many literary works, but was best known for his 1939 novel entitled “Beware of Pity”. He was also the writer of the 1917 play named “Jeremiah”.

The writer was raised by his parents Moritz Zweig and Ida Brettauer. He married Friderike Maria von Winternitz in 1920 but they divorced 18 years later. He later married Lotte Altmann.

He attended the University of Vienna where he read philosophy.

His 1942 memoir “The World of Yesterday”, which talked about life under Franz Joseph I, has been described as the most popular literature about the Habsburg Empire.

Some of his well-known works were titled “The Royal Game” and “Letter from an Unknown Woman”.

Stefan's birthday is in 297 days

How old was Stefan when he died?

Stefan Zweig would be 141 years old if he was alive today.

Where was Stefan from?

He was born in Vienna, Austria.