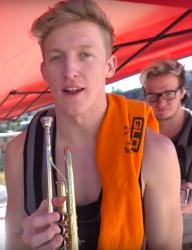 Turner Ellis Tenney, popularly known as Tfue, is an American YouTuber, a Twitch streamer and a professional gamer. In 2018, he joined an eSports organization named “FaZe Clan”.  He gained his popularity status playing the game named “Fortnite”.

He has a sister identified as Alexandra and two brothers known as Pierce and Jack Tenney. Jack is also a famous YouTube star. As at 2019, he was in a relationship with Corinna Kopf.

In 2018, his channel on Twitch under the username Tfue was the number 8 most-watched channel on the App.

Tfue's birthday is in 26 days

Where is Tfue from?

He was born in Indian Rocks Beach, Florida, U.S.A..