German retired footballer, Thomas Hitzlsperger was still pursuing a youth career when he moved from Bayern Munich to Aston Villa in 2000. After a year with the Aston Villa youth team, he made his senior team debut in 2001. He played for the team until 2005, when he returned to his home country to play for VfB Stuttgart. He followed it up with a stint in 2010 in Italy with Lazio and then another one in England with West Ham United from 2010 to 2011.

He was born to Anneliese and Ludwig Hitzlsperger as the youngest of their seven children. He was raised in Forstinning, Germany. He ended his 8-year relationship with a woman named Inga in June 2007, just a month shy of their wedding date. In 2014, he revealed that he identifies as gay.

He won the Bundesliga with VfB Stuttgart. He received Germany’s Federal Cross of Merit in 2020.

He was appointed as VfB Stuttgart’s head of sport in February 2019. 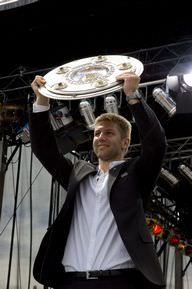 Thomas Hitzlsperger's birthday is on April 5, 1982.

Thomas' birthday is in 182 days

Where is Thomas from?

He was born in Munich, West Germany.

What is Thomas Hitzlsperger's height?