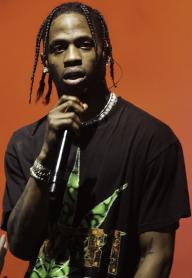 He signed his first major deal with popular record company, Epic Records in 2012, and another with Kanye West’s GOOD Music. In the following year, he was signed to T.I’s Grand Hustle.

He self-released his first mixtape, Owl Pharaoh and second mixtape, Days Before Rodeo in 2014.

He was raised by his grandmother but later moved to stay with his father, a business owner and soul musician, and his mother, an Apple employee. He dated reality star, Kylie Jenner from 2017 to 2019 and had a daughter known as Stormi Webster in February 2018 from their relationship.

His debut album, Rodeo (2015) featured several artists including Kanye West, Quavo, The Weeknd, Justin Bieber, Swae Lee among others, hitting number one on the Billboard Rap Albums chart, number 3 on the Billboard 200 chart and number 16 on the US Billboard 100.

His single, “Sicko Mode” reached number one on the Billboard Hot 100 charts in 2018.

He dropped out of the “University of Texas at San Antonio” in his second year to pursue music fully.

Travis' birthday is in 191 days

People born on April 30 fall under the Zodiac sign of Taurus, the Bull. Travis Scott is the 34th most popular Taurus.

Aside from information specific to Travis Scott's birthday, Travis Scott is the 256th most famous American and ranks 4th in famous people born in Texas, U.S.

In general, Travis Scott ranks as the 362nd most popular famous person, and the 25th most popular rapper of all time. “The Famous Birthdays” catalogs over 40,000 famous people, everyone, from actors to actresses to singers to tiktok stars, from serial killers to chefs to scientists to youtubers and more. If you're curious to see who was born on your birthday, you can use our database to find out who, what, where, when and why. You can search by birthday, birthplace, claim to fame or any other information by typing in the search box, or simply browse our site by selecting the month, the day, the horoscope, or any other clickable option.