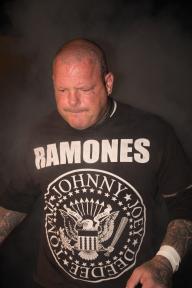 Vampiro is the stage name of Canadian wrestler Ian Richard Hodgkinson. He started his professional career in 1984 under the International Wrestling promotion. He joined the Universal Wrestling Association in 1991 before making his big move to World Championship Wrestling (WCW) seven years later.

While working with the WCW, he won the World Tag Team Championship in 2000 alongside The Great Muta. The two were collectively known as the Dark Carnival. His popularity in the sport has increased due to his association with other promotions like the World Wrestling Council and Total Nonstop Action Wrestling.

He spent his early years with his mother alongside two sisters. His marriage to Kitsu produced a child called Dasha.

Before starting his wrestling career, he worked with the Milli Vanilli music group as their bodyguard.

He also played ice hockey for the Kingston Frontenacs.

Vampiro's birthday is in 243 days

Where is Vampiro from?

He was born in Thunder Bay, Ontario, Canada.