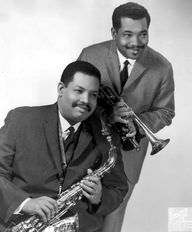 He gained global fame with his 1966 jazz single titled "Mercy, Mercy, Mercy". He also collaborated with many popular musicians including Sarah Vaughan and Miles Davis.

At birth, he was named Julian Edwin Adderley. During his time with the aforementioned band, he performed alongside his brother Nat Adderley. In 1962, he tied the knot with Olga James, a singer.

He was a product of Florida A&M University.

He became a member of the Down Beat Jazz Hall of Fame in 1975.

Until 1950, he worked with Dillard High School as their band director.

He also performed alongside Ray Charles.

His love for food earned him the nickname "cannibal" which later became "cannonball".

Cannonball Adderley's birthday is on September 15, 1928.

Cannonball Adderley's birthday is in 285 days

How old was Cannonball Adderley when he died?

Cannonball Adderley would be 94 years old if he was alive today.

Where was Cannonball Adderley from?