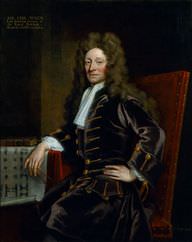 Christopher Wren was an English architect, geometer, anatomist, mathematician-physicist and astronomer. He is known for having designed 54 churches in London, including St. Paul’s Cathedral and other prominent buildings. The latter include the Old Royal Naval College and the Royal Hospital Chelsea. A founder of the Royal Society, he occupied office as its third president from 1680 to 1682. He was also a four-time Member of the English Parliament between 1685 and 1702.

He was the only offspring of Mary Cox and Christopher Wren the Elder, Dean of Windsor, to have survived childhood. He was married twice: to Faith Coghill from 1669 to 1675 and to Jane Fitzwilliam from 1677 to 1680. He had five children.

Christopher's birthday is in 257 days

How old was Christopher when he died?

Christopher Wren would be 390 years old if he was alive today.

Where was Christopher from?

He was born in East Knoyle, Wiltshire, England, UK.