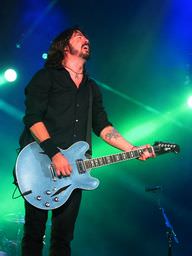 His musical career began at the age of seventeen with the band Scream in 1986. He joined Nirvana in 1990 as a drummer. Following the death of Nirvana's lead singer Cobain in 1994, Grohl started Foo Fighters. In 2009, he co-founded the rock supergroup Them Crooked Vultures.

From 1994 to 1997 he was married to photographer Jennifer Youngblood. In 2003 he married Jordyn Blum and fathered children with her.

In 2012, he came after Phil Collins and Ringo Starr as the world's third richest drummer. 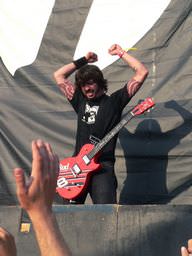 I love to play music. So why endanger that with something like drugs?Dave Grohl

I was ready to quit music. It felt to me like music equalled death.Dave Grohl

It's funny recently I've started to notice people's impersonations of me, and it's basically like a hyperactive child.Dave Grohl

Ladies and gentlemen, god bless America - land of the free, home of the brave.Dave Grohl

My mother was a public school teacher in Virginia, and we didn't have any money, we just survived on happiness, on being a happy family.Dave Grohl

Through Kurt I saw the beauty of minimalism and the importance of music that's stripped down.Dave Grohl

When I listen to music these days, and I hear Pro Tools and drums that sound like a machine - it kinda sucks the life out of music.Dave Grohl

When Nirvana became popular, you could very easily slip and get lost during that storm. I fortunately had really heavy anchors - old friends, family.Dave Grohl

English musician and the drummer of The Beatles

Dave's birthday is in 192 days

Where is Dave from?