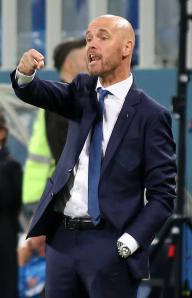 Erik ten Hag recorded some amount of successes as a player before starting his coaching career. During his playing days, he was mostly used as a central defender and featured for teams like De Graafschap, FC Twente, and Utrecht. He helped the former to win the Eerste Divisie in 1991. He was also a member of the Twente team that won the 2000/2001 edition of the KNVB Cup.

The Dutch soccer star is best known for his training ground routines. His managerial career began in 2012 when he joined Go Ahead Eagles as their head coach. He went on to work with Bayern Munich II, and Utrecht before joining AFC Ajax in 2017.

Ten Hag won three Eredivisie titles, two KNVB Cup, and a Johan Cruyff Shield before leaving Ajax in 2022. He also helped them to the semi-final stage of the UEFA Champions League. In 2022, he was named as the manager of English side Manchester United.

The ex-soccer player and coach has been married to a lady called Bianca.

In 2021, he received his third Rinus Michels Award.

His 100 wins from 128 matches made him the Eredivisie’s fastest manager to reach the landmark.

He won the Regionalliga Bayern with Bayern Munich II.