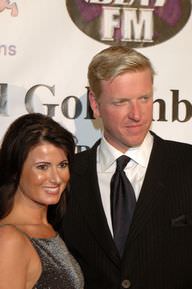 Jake Busey is a prominent American actor, singer, and filmmaker who hails from a family of show business. He rose to popularity in the 90s with parts in films such as "The Frighteners," "Starship Troopers," and the comedy "Tomcats”.

In 2014, he got back on the rails with the help of filmmaker Robert Rodriguez After hiring him in the series "From Dusk Till Dawn: The Series" despite the fact that he was living in his vehicle at the time.

He is also recognized for his outstanding performances in a number of successful films and television shows such as "Tail Lights Fade," "Charmed," and "Code Breakers," among others.

He was born to actor Gary Busey and photographer Judy Helkenberg. He has a sister called Alectra Busey.

He started dating April Hutchinson, a makeup artist, and the two had a daughter called Autumn together.

With his father, he made his cinematic debut in the crime film “Straight Time”.

He had a passion for playing the drums since his childhood.

He was born in England and is of English, Scottish, Irish, German, and French heritage.

In the early 1990s, he appeared in two MTV commercials.

Jake's birthday is in 260 days

Where is Jake from?