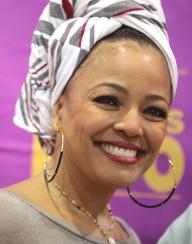 Kim Fields is a wonderful and captivating American television actress, producer, and director who began her career as a child in the field of acting and advertisements. Kim's first acting job came when she was five years old, although she went mostly undetected. She made her acting debut on the classic NBC comedy "The Facts of Life" when she was just 9 years old. Kim became well-known in the United States as Tootie Ramsey, the role she played.

She has appeared in several successful films and television programs as an experienced actress, including "Uninvited Guest," "A Question of Faith," "Strong Medicine," "Living the Dream," and "The Comeback."

Besides her acting career, she is also a talented musician who has recorded albums in rap and R&B genres. She is also known to have featured in a variety of popular reality shows and dance contests.

She married Christopher Morgan in 2007. Before her marriage with Morgan, she was the wife of Jonathon Freeman between 1995 and 2001.

She was born to Chip Fields and Erv Hurd.

She was raised together with Alexis Fields, her sibling.

She has a degree in communication.

She has a production company named Victory Entertainment.

Where is Kim from?