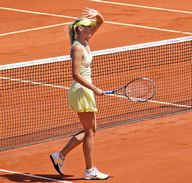 Title
Sharapova at the end of her match with Mirjana Lucic waving to the crowd
Author
y.caradec
Source
http://commons.wikimedia.org/wiki/File:2011_French_Open_Maria_Sharapova_.jpg
License
CC BY-SA 2.0

Maria Sharapova is a professional tennis player, entrepreneur, and model. She is ranked #4 in the world by the Women’s Tennis Association.

At age 18, Maria became ranked #1 in the world. She then went on to hold numerous tour titles including going on a 15 match winning streak. She won the 2004 Wimbledon Open, the 2006 U.S. Open, and the 2008 Australian Open. Since 2009 she has been plagued with injuries to her shoulders, forearms, and ankle. Her most powerful serve was measured at a whopping 121 mph.

Maria has been a U.S. citizen since 1994. She has donated over $200,000 towards the Cherynobyl-recovery efforts. It is due to Chernobyl that her family left, her parents were frightened of the fall out. In 2006, Maria appeared in the Sports Illustrated Swimsuit Edition.

Maria's birthday is in 139 days

Where is Maria from?

She was born in Nyagan', Siberia, Russia.

What is Maria Sharapova's height?