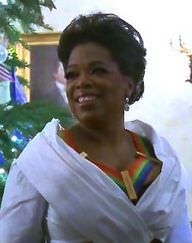 Oprah Winfrey, who is also known as the “Queen of All Media”, is a revered talk show host, media proprietress and actress best known for her legendary talk show “The Oprah Winfrey Show”, which is widely regarded as one of the greatest TV shows of all time. In 2000, she was regarded as the richest African-American of the 20th century.

Beginning her career in 1973, Winfrey worked at various radio stations such as WLAC-TV (now known as WTVF-TV), and WJZ-TV, where she served as an anchor. She was employed at WLS-TV to host their morning talk show called “AM Chicago”.  The show was then hosted by the media personality Dennis Swanson. The show was considered a low rated talk show but when Winfrey began to host the show, it became one of the most listened to shows in Chicago. The name of the show was later changed to the “Oprah Winfrey Show” and made its first broadcast in 1986. The show surpassed its competitor, which was “The Phil Donahue Show”. It was rated as the number daytime talk show in America. The talk show personality also received positive credits from The Wall Street Journal.

As part of her hosting career, she interviewed popular celebrities, including the King of Pop, the late Michael Jackson and Prince Harry and his wife.

The renowned television host made appearances in movies like “The Color Purple” and “A Wrinkle in Time’.

In 2013, President Barack Obama honored her with the Presidential Medal of Freedom, the highest civilian honor in the United States.

CNN referred to her as "arguably the world's most powerful woman". She has also appeared several times on Time's list of the most influential people in the world.

She was criticized by people after Mathew Drudge said she didn’t want the American politician Sarah Palin to make an appearance on her show. Aside from Matt Drudge, she has also received some criticism from entertainment personalities such as 50 Cent and Ice Cube.

Winfrey did not enjoy a happy childhood growing up. While being raised by her grandmother for six years, she was abused by her family members.

She attended Nicolet High School and earned for herself a scholarship to Tennessee State University after winning an oratory competition.

Her relationship with her longtime boyfriend Stedman Graham began in 1986. They were expected to tie the knot in 1992, and as of 2022, they are still not married.

She became pregnant at the age of 14 and gave birth to a son who died in infancy.

Some of Winfrey’s literary works include: “Oprah Winfrey: The Soul and Spirit of a Superstar” and “Food, Health and Happiness”.

Oprah's birthday is in 54 days

Where is Oprah from?

She was born in Kosciusko, Mississippi, U.S..