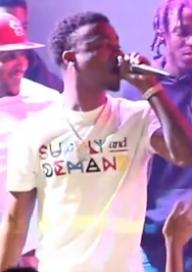 He began rapping at age 8, started recording beats at 16 and released his first mixtape titled Feed Tha Streets in November 2017. This track won the admiration of many including rapper Nipsy Hussle who invited Roddy to the Los Angeles Powerhouse concert.

He was raised by his grandmother. However, details concerning other members of his family have been kept private.

His first studio album, Please Excuse Me for being Antisocial, released in December 2019, debuted at number one on the Billboard 200 chart.

He was a skilled basketball player in high school.

He is virtually obsessed with collecting shoes.

People born on October 24 fall under the Zodiac sign of Scorpio, the Scorpion. Roddy Ricch is the 197th most popular Scorpio.

Aside from information specific to Roddy Ricch's birthday, Roddy Ricch is the 1535th most famous American.

In general, Roddy Ricch ranks as the 2443rd most popular famous person, and the 129th most popular rapper of all time. “The Famous Birthdays” catalogs over 25,000 famous people, everyone, from actors to actresses to singers to tiktok stars, from serial killers to chefs to scientists to youtubers and more. If you're curious to see who was born on your birthday, you can use our database to find out who, what, where, when and why. You can search by birthday, birthplace, claim to fame or any other information by typing in the search box, or simply browse our site by selecting the month, the day, the horoscope, or any other clickable option.