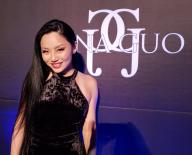 Tina Guo’s love for music began at a very young age. At age three, she had started playing the piano. By the age of 10 years, she had mastered the art of playing the cello, and was an integral member of a group known as Civic Youth Orchestra.

Considered as one of the talented cellists of her generation, the Chinese-American instrumentalist has performed alongside some top musical groups like Mexico’s National Symphony Orchestra, and the famous San Diego Symphony. Her performances have led her to countries like Germany, Japan, and Mexico.

By the end of 2017, Guo had released eight studio albums with the most popular ones titled “Game On!”, “A Cello Christmas” and “The Journey”.

The highly-rated cellist has been privileged to perform on the same platform with top musical acts such as Midori Goto, Al Di Meola, John Legend, and Carrie Underwood.

She was trained at the famous USC Thornton School of Music.

Her appearance on “The Ellen DeGeneres Show” has further increased her popularity.

Her parents got angry at her when she decided to abandon her education to pursue her musical dream.

In 2011, she released her first album titled “Autumn Winds”.

Her works have been featured in some top movies such as “Fast Five” and “Batman V. Superman”.

She has amassed not less than 388,000 subscribers on YouTube.

Tina's birthday is in 331 days

Where is Tina from?

She was born in Shanghai, China.

Tina Guo is a famous Chinese-American cellist, who was born on October 28, 1985. As a person born on this date, Tina Guo is listed in our database as the 85th most popular celebrity for the day (October 28) and the 587th most popular for the year (1985).

People born on October 28 fall under the Zodiac sign of Scorpio, the Scorpion. Tina Guo is the 2789th most popular Scorpio.

Aside from information specific to Tina Guo's birthday, Tina Guo is the 9th most famous Chinese-American and ranks 12th in famous people born in Shanghai, China.

In general, Tina Guo ranks as the 34805th most popular famous person, and the 472nd most popular musician of all time. “The Famous Birthdays” catalogs over 40,000 famous people, everyone, from actors to actresses to singers to tiktok stars, from serial killers to chefs to scientists to youtubers and more. If you're curious to see who was born on your birthday, you can use our database to find out who, what, where, when and why. You can search by birthday, birthplace, claim to fame or any other information by typing in the search box, or simply browse our site by selecting the month, the day, the horoscope, or any other clickable option.