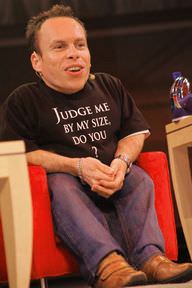 Warwick Davis is a British actor, television presenter, writer, director and producer. He also has a rare form of dwarfism.

Warwick Davis made is break as an actor as an Ewok in Star Wars: Episode VI – Return of the Jedi. His mother had heard that they needed people shorter than 4 ft tall, so he auditioned. After Star Wars, Davis played the role of a goblin in the surreal fantasy movie Labrynth, starring David Bowie. He has since been in many other popular films, including Willow, Leprechaun, Star Wars: Episode I – The Phantom Menace, and the Harry Potter film series.

It's interesting to see what people are saying about me. I like keep up with the latest rumors! A while back there was a rumor that I was going to do a film with Demi Moore about the takeover of Commodore computers!Warwick Davis

My dad instilled in me a great sense of humor. I wasn't bullied at school because my outward attitude was confident, and that helps.Warwick Davis

My parents armed me with an amazing sense of humor, and it's what you need when, well, it's what anyone needs in this world.Warwick Davis

When I was born in 1970 with a rare genetic disorder called spondyloepiphyseal dysplasia congenita (SED), medical science wasn't what it is today and my mum and dad were treated terribly by the medical profession.Warwick Davis

Warwick's birthday is in 213 days

Where is Warwick from?

He was born in Epsom, Surrey, England, UK.

What is Warwick Davis' height?