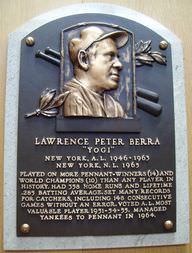 Yogi Berra was an American professional baseball player who spent his entire Major League Baseball playing career with the New York Yankees and the New York Mets. He later went on to manage and coach both teams. He is regarded as one of the greatest baseball players of all time and was posthumously honored with the Presidential Medal of Freedom by President Barack Obama in 2015.

In 1949, he married Carmen Short and fathered three sons with her. All his sons ended up becoming professional sportsmen.

In 1972, the Yankees honored him by retiring the jersey number 8, which he wore while playing for the team. That same year, he was honored with an induction into the Baseball Hall of Fame.

He joined the United States Navy and fought during World War II.

A nickel ain't worth a dime anymore.Yogi Berra

Half the lies they tell about me aren't true.Yogi Berra

How can you think and hit at the same time?Yogi Berra

I don't blame the players today for the money. I blame the owners. They started it. They wanna give it to 'em? More power to 'em.Yogi Berra

I don't mean to be funny.Yogi Berra

I never blame myself when I'm not hitting. I just blame the bat and if it keeps up, I change bats. After all, if I know it isn't my fault that I'm not hitting, how can I get mad at myself?Yogi Berra

I never said most of the things I said.Yogi Berra

Little League baseball is a very good thing because it keeps the parents off the streets.Yogi Berra

The future ain't what it used to be.Yogi Berra

You better cut the pizza in four pieces because I'm not hungry enough to eat six.Yogi Berra

You wouldn't have won if we'd beaten you.Yogi Berra

Recipient of the Purple Heart medal

Yogi's birthday is in 310 days

How old was Yogi when he died?

Yogi Berra would be 97 years old if he was alive today.

Where was Yogi from?