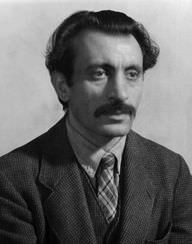 Arshile Gorky was an Armenian-born American painter best known for his works in Abstract Expressionism. He is generally regarded as one of the greatest artists of the 20th century.

He was born Vostanik Mansug Adrian and grew up in a little Armenian village. In 1908, his father sent him to the United States (US) to avoid the draft. He returned later, and in 1915, Gorky and his family fled their hometown to escape the Armenian Genocide that happened during the final few years of the Ottoman Empire. He returned to the US and reinvented himself as Arshile Gorky.

After attending the Rhode Island School of Design to study painting, Gorky immersed himself into the Greenwich Village Bohemian lifestyle in New York City. Between the mid-1920s to early 1930s, he taught at the Grand Central School of Arts.

Gorky was determined to become a painter, and other artists like Pablo Picasso heavily influenced his earlier works. However, it wasn't until the late 1930s that Gorky developed his style, and he quickly became one of the most prolific painters in US modern history.

Towards the end of his life, he was involved in many unfortunate occurrences.

Arshile Gorky died in 1948 after hanging himself.

Gorky married Agnes Ethel Magruder in 1941, and they had two daughters.

Arshile's birthday is in 200 days

How old was Arshile when he died?

Arshile Gorky would be 118 years old if he was alive today.

Where was Arshile from?

He was born in Khorgom, Vilayet of Van, Ottoman Empire.