Infamous 30's gangster John Dillinger was considered the most notorious criminal at the time.

Dillinger's first attempt at petty crime landed him in prison. He then escaped and formed the Dillinger Gang, which robbed a total of 24 banks and 4 police stations. He eventually was shot and killed by police.

Although not as violent as his partner “Baby Face” Nelson, Dillinger was the more notorious of the two. After his death, a novel called The Dillinger Days portrayed him as Robin Hood-esque vigilante. In response to Dillinger's crime spree, the Federal Bureau of Investigation went through improvement. 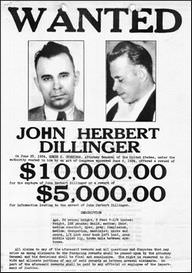 John's birthday is in 352 days

John Dillinger would be 119 years old if he was alive today.

He was born in Indianapolis, Indiana, U.S..